Another evening of beer and brotherhood convened at Caverly’s Irish Pub on South Avenue in Rochester. Here, the beer is reasonable, the people friendly and the ‘bar dog’ can sniff only as high as your knees.

Caverly’s is cozy and casual with a few round tables scattered about a high bar rising over a well-worn hardwood floor, a common man’s pub. The bar area, itself, is a colorful array of tap handles and an oversized chalkboard menu featuring an ample variety of brews. 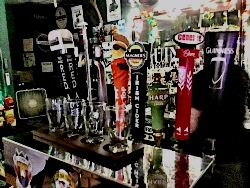 With beer in hands, we raised our glasses and cheered each other in genuine fashion. These nights of friendship give us Seniors a chance to get caught up with each other. Sometimes, we learn something new, sometimes we’re surprised and sometimes it’s both.

Tonight was just such a night when one of us offered that ‘ants weigh more than humans’. The rest certainly were surprised and showed it, as the ‘huh?’ look spread across our collective brows. But when the source* was cited…well, we learned something new, and ‘ant weight’ aside, we were bemused that someone in our group actually read, ‘Journey To The Ants’.

Does the adjective, ‘eclectic’ apply to a group that can drink beer and discuss ants in the same evening?

And would you be surprised to learn that another traveled 75 miles to see a former Beatle, Paul McCartney, in concert? Remember, we’re products of the 60s, give or take a decade.

As teens, we borrowed the family car and drove around with other music lovers, slapping out rhythms on the dashboard ‘drums’, our mops flopping side to side while head bobbin’ to rock ‘n roll. We still move to the beat when we hear the oldies, but ‘head banging’ today with scarce a wisp, leaves much to be desired.

Detailing an event or destination as vividly as the concert was allows me to feel there’s no need to go there, myself. I often say, facetiously of course, that ‘the listening is the same as the going’. I’ve ‘been to many places that I’ve never been’ with this philosophy.

One among us went there**, and we deferred to him briefly when the topic surfaced. A cacophony of silence spoke volumes to our lack of personal knowledge of the real horror of war, except for the one. There is no substitute for being there, a loud exception to my ‘philosophy’

We paused with our own thoughts, finished our one beer and called it a night, a rather solemn ending. The summer-like evening air on this fall night was comforting as we took our time to the car. Another enjoyable evening was behind us…

Friendship is a wonderful thing!