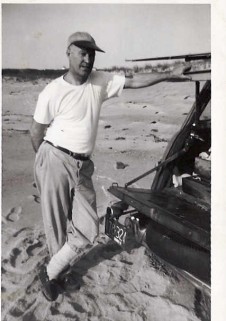 “Pardon me”, I mumbled, while stretching and reaching in front of a shopper more involved with a cell phone call than picking a yam and moving outta the damn way… (excuse my tone, but, yes, I was becoming impatient in a grocery store).

“It’s okay”, she replied curtly, “besides, that’s why they made arms.”

Regardless if it was sarcasm, naïveté, or simple courtesy, her reply completely disarmed me, no pun intended.

I had no retort except to sigh and smile, which was not a bad thing. If we all could be coy enough to react to interruptions and interferences with a bit of sugar-coated sarcasm, there would be fewer angry people.

My ‘old man’ (I never called him that, but it seemed to fit well here) was a hard worker in every sense, fishing being no exception. He would rouse us early from our warm bags and onto the water before sunrise and before the fish started feeding. We worked hard for the catch and ridiculed, even scorned, the late arriving boats, the ‘9 to 5ers’.

A late Spring morning found us fishing for striped bass in a small bay somewhere on the Cape Cod coast (fishermen never reveal exact locations). With anchor down and the morning fog burning off, we were surrounded by schools of stripers and enjoying water thumping hits every cast. The late arrival from a shoreline dock noticed us and slowly motored his skiff closer and closer, casting deeper and deeper into ‘our waters’, hoping to be part of the action, himself, but failing miserably.

You could see it coming, my dad’s tolerance level fading fast, beginning with icy glares over our bow and across the water at this intruder who was oblivious to the angler’s rule, ‘you don’t fish in another man’s water’.

I was impressed with his effort to maintain control and decorum, but not surprised when he dropped his rod, cupped his hands in a funnel around his mouth and delivered a bellowing invitation, dripping with sarcasm…

“Why don’t you come closer?”

The gulls watched from a buoy, the water went glassy, the fish quit working. We were surrounded by silence, waiting.  And then, it came…

It was a classic mocking response,  deliberate and subtle.  My father was at a loss for words … but not action.

The ‘old salt’ grabbed the wheel with one hand, gunned the motor, spun the boat to roil the water and headed to shore. With the other hand, he reached upward and back toward the interloper, and with nary a glance, delivered the anglers’universal one finger response.*

I realized then, years before my grocery store episode…

That’s why they made arms!

*the writer does not approve this behavior, then or now…